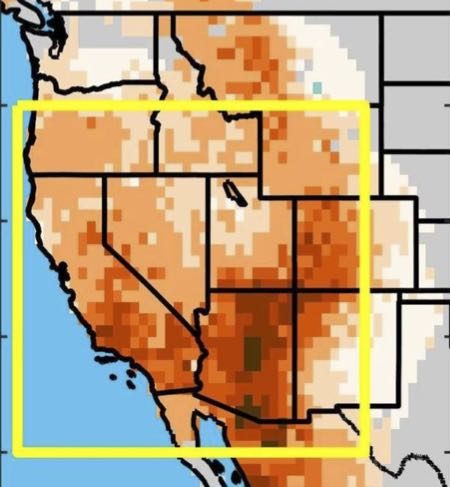 A drought, equal to the worst to have hit the western US in recorded history, is already under way, say scientists.

Researchers say the megadrought is a naturally occurring event that started in the year 2000 and is still ongoing.

Climate change, though, is having a major impact with rising temperatures making the drought more severe.

Some researchers are more cautious, saying that it is too early to say if the region really is seeing a true megadrought.

So what exactly is a megadrought?

According to the authors of this new paper, a megadrought in North America refers to a multi-decade event, that contains periods of very high severity that last longer than anything observed during the 19th or 20th centuries.

The authors say there have been around 40 drought events over the period from 800-2018 in the western US.

Of these, only four meet the criteria for a megadrought.

How do researchers know what drought conditions were like in the past?

Scientists looked at a nine-state area from Oregon and Wyoming down through California and New Mexico, plus a sliver of southwestern Montana and parts of northern Mexico. They used thousands of tree rings to compare a drought that started in 2000 and is still going — despite a wet 2019 — to four past megadroughts since the year 800.

A dried out lake stands near the Navajo Nation town of Thoreau on June 06, 2019 in Thoreau, New Mexico.

University of Michigan environment dean Jonathan Overpeck, who studies southwestern climate and was not part of the study, calls it “the first observed multidecadal megadrought in recorded U.S. history.”

Although last year was wet, past megadroughts have had wet years and the recent rain and snow was not nearly enough to make up for the deep drought years before, Williams said.

The U.S. drought monitor puts much of Oregon, California, Colorado, Utah and Nevada and good chunks of New Mexico, Arizona and Idaho in abnormally dry, moderate or severe drought conditions. Wyoming is the only state Williams studied that doesn’t have large areas of drought.

This week, water managers warned that the Rio Grande is forecast to have water flows less than half of normal, while New Mexico’s largest reservoir is expected to top out at about one-third of its 30-year average.

The key to this new study is the use of tree ring records to reconstruct soil moisture data for the past 1200 years.

The team were also able to use supporting evidence such as medieval tree stumps growing in normally wet river beds, the abandonment of settlements by indigenous civilizations at the peak of the 13th century drought, plus evidence from lake deposits indicating wildfire activity was enhanced during these drought periods.

What did the study find?

The researchers discovered that when they compared the worst 19-year drought events in the past to soil moisture records from 2000-2018, the current period is already worse than three of the four megadroughts recorded.

The fourth one, which ran from 1575 to 1603 was likely the worst one of all, but the difference with the present event is slight.

“In fact, it is essentially tied with the worst two decades of the worst of the mega droughts.”

Is the current megadrought a natural event or was it caused by climate change?

The authors say that undoubtedly the current drought situation is a natural event but is being made much worse by climate change.

The key event seems to have been the El Niño/La Niña weather phenomenon.

“We know from, from many lines of evidence that when you have La Niña type conditions in the tropical Pacific Ocean, then the southwestern US and northern Mexico get dry. And that’s what we’ve seen over the last two decades,” said Dr Williams. 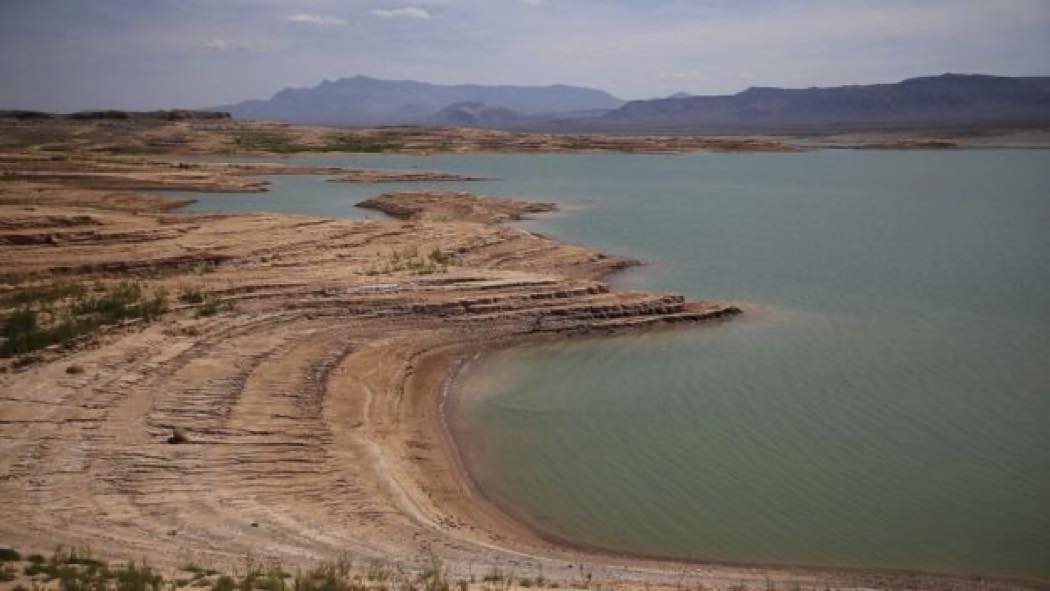 saw huge drop in water levels during the recent drought

But climate change has super-charged the current drought.

The authors say that in the western US, temperatures have gone up by 1.2C since 2000. Hotter air holds more moisture and that moisture is being pulled out of the ground.

They believe that climate change is responsible for about half of of the pace and severity of the current event.

“It doesn’t matter if this is exactly the worst drought ever,” said co-author Benjamin Cook, who is affiliated with Columbia University and Nasa’s Goddard Institute for Space Studies.

“What matters is that it has been made much worse than it would have been because of climate change.”

What’s happening now is “a drought bigger than what modern society has seen,” said study lead author A. Park Williams, a bioclimatologist at Columbia University.

Daniel Swain, a UCLA climate scientist who wasn’t part of the study, called the research important because it provides evidence “that human-caused climate change transformed what might have otherwise been a moderate long-term drought into a severe event comparable to the ‘megadroughts’ of centuries past.”

What have been the impacts of the megadrought?

The authors say the two most important water reservoirs in the region, Lake Powell and Lake Mead have both shrunk dramatically during the drought. Wildfires across the region are growing in area.

“At any given year, there’s over ten times more forest area burns than we would have expected in a given year, 40 years ago,” said Dr Williams.

What has helped to mitigate the impact of the drought has been groundwater – the water held underground in aquifers.

This has increasingly been used to bolster supplies for agriculture.

The longer the drought goes on, the deeper into these reserves that people are digging, and they take a long time to replenish.

Is there full agreement among scientists that a megadrought is taking place right now?

No. This new study is contentious, especially as the definition of what exactly a megadrought means is still being argued over.

Some say that it is also way too early to declare that a megadrought is ongoing.

There’s debate among scientists over whether this current drought warrants the title “megadrought” because so far it has only lasted two decades and others are at least 28 years long.

But even those who disagree with the idea, acknowledge there is water stress in the region and this is likely to get worse in the future.

“Whether or not the western US has crossed a threshold into an event that goes by any specific label, what’s been clear this century is that water is an essential resource in the western US, and it’s a precarious one, because the region can have long spells with little precipitation,” said Dr Angeline Pendergrass, a scientist with the US National Center for Atmospheric Research (NCAR).

“And it looks like climate change won’t make it better – indeed, it will likely make it worse.”

The study has been published in the journal Science.

See all authors and affiliations

A trend of warming and drying

Global warming has pushed what would have been a moderate drought in southwestern North America into megadrought territory. Williams et al. used a combination of hydrological modeling and tree-ring reconstructions of summer soil moisture to show that the period from 2000 to 2018 was the driest 19-year span since the late 1500s and the second driest since 800 CE (see the Perspective by Stahle). This appears to be just the beginning of a more extreme trend toward megadrought as global warming continues.

Severe and persistent 21st-century drought in southwestern North America (SWNA) motivates comparisons to medieval megadroughts and questions about the role of anthropogenic climate change. We use hydrological modeling and new 1200-year tree-ring reconstructions of summer soil moisture to demonstrate that the 2000–2018 SWNA drought was the second driest 19-year period since 800 CE, exceeded only by a late-1500s megadrought. The megadrought-like trajectory of 2000–2018 soil moisture was driven by natural variability superimposed on drying due to anthropogenic warming. Anthropogenic trends in temperature, relative humidity, and precipitation estimated from 31 climate models account for 47% (model interquartiles of 35 to 105%) of the 2000–2018 drought severity, pushing an otherwise moderate drought onto a trajectory comparable to the worst SWNA megadroughts since 800 CE.